Even though the term “water hardness“ is outdated and inacurate in terms of modern hydrochemistry, it is so deep-rooted among both the general public and experts, that we hear it quite commonly even today. The term hard water was never clearly defined, but in general this designation means the concentration of multivalent cations of alkaline earth metals. Above all, the sum of bivalent cations of calcium and magnesium (Ca2 + / Mg2 +). There may also be additional elements such as e.g. barium, strontium, manganese, iron and others.

The concentration of all minerals contained in the pumped water, including calcium and magnesium, depends mainly on the geological bedrock. The mineral content may dramatically vary from a region to a region. If the provided water source is found in the calcium rich bedrock, the water will be characterized by greater "hardness" than the water flowing through a granite rock.

The negative effects of hard water are primarilym anifested as so-called water and boiler scale, which precipitates in the solid form on the piping surface, on valves, containers, and all parts of the installed equipment, which comes into contact with water. The result of this process is a gradual flow reduction and decreasing of the equipment durability and performance. Also it increases power consumption and the water scale ultimately ingrows the pipeline. Water too soft is also not desirable, because it is corrosive, and accelerates the corrosion of materials subjected to its presence.

From a health perspective, the higher content of calcium and magnesium is rather beneficial for human body, however there is a direct link between the high calcium and magnesium content and skin dehydration, with subsequent problems in the form of atopic eczema and other dermatological diseases. The studies conducted on the effects of different concentration levels and reciprocal Ca/Mg ratio on human health do not match. Ministry of Health Decree no. 83/2014 Coll. does not specify any limits regarding the calcium and magnesium concentration, but only recommends the range 2-3,5 mmol/l.

Total water hardness is divided into carbonate (temporary) and non-carbonate (permanent). The specific amount of water hardness can be determined either by quantitative analysis, or even by testers (dropper/papers/Meters) intended for this purpose.

Carbonate (tremporary) hardness is formed by calcium bicarbonate Ca(HCO3)2 and magnesium bicarbonate Mg(HCO3). These salts are very well soluble in the water under normal conditions, but at elevated temperature the balance between carbon dioxide, pH and bicarbonates alteres and salts transform to the insoluble calcium carbonate (CaCO3) and magnesium carbonate (MgCO3). These carbonates are refered to as so-called "water scale" or "boiler scale" and they are settling not only on heat transfer surfaces of equipment and pipelines. Concentration of calcium and magnesium in water of course decreases by such a scaling (decarbonization) and the water hardness is logically reduced.
Ca(HCO3)2   -->   CaCO3 + H2O + CO2   |   Mg(HCO3)2   -->   MgCO3 + H2O + CO2

Non-carbonate (permanent) water hardness does not change with a temperature or pressure changes and salts forming the permanent water hardness do not precipitate by heating, but remain in a soluble form in in the water. For this reason, the hardness of a permanent / fixed character. Non-carbonate water hardness is composed of other calcium and magnesium salts, than bicarbonates. There are mainly sulfates (calcium sulfate CaSO4 and magnesium sulfate MgSO4) present, but also chlorides, nitrates and silicates. The precipitation of such a hardness is carried out using calcium hydroxide Ca(OH)2 and sodium carbonate Na2CO3 to form insoluble calcium carbonate CaCO3 and magnesium hydroxide Mg(OH)2.
MgSO4 + Ca(OH)2   -->   CaSO4 + Mg(OH)2   |   CaSO4 + Na2CO3   -->   CaCO3 + Na2SO4

Total water hardness is caused by all calcium and magnesium salts.
The unit of water hardness is the current standard set value that expresses the sum of calcium and magnesium in millimoles per liter (mmol/l). There is also several other measuring units still in use, but they are not used very often. These are for example German (°dH), English (°e), French (°F) and American (ppm) grades. In the Czech Republic we still routinely meet with German degrees.

Water hardness range is also divided into categories and is more of an indicative character.

To reduce the water hardness we can use processes of water distillation, ion exchange, membrane technologies and precipitation by dosing of various compounds. The reduction of the hard water effects is usually achieved by dosing of water hardness inhibitors (antiscalants) or by magnetic treatment.

Among the most common ways of water "softening" belongs the ion exchange technology, which is in use since the 1920. It is a simple, effective and relatively low-cost technology, suitable for the industry, but also for households.
This is a process where the water flows through the ion exchange resin, which is in the form of small beads. Resin binds the calcium and magnesium ions contained in the water and replaces them with the ions of the element that an ion exchanger carries on its skeleton.

Ion exchange resin intended for the water "softening" can work in the Na+ cycle, where the cations of Ca and Mg are substituted for the sodium cations, or also in the H+ cycle, where the Ca and Mg cations are exchanged for hydrogen cation. The main advantage of this technology is that it has only a minimal influence on the increase of corrosive effects and total mineralization of treated water, so all the sensory properties of the water are retained.

Resin filling has its specific capacity, that is exhausted when its structure becomes overfilled with Ca/Mg cations and it bonds no more Na or hydrogen cations on its skeleton. The so-called regeneration of resin in the Na + cycle is performed by the countercurrent flushing with a brine solution (dissolved pelletized NaCl for regeneration), which again substitutes any entrapped calcium and magnesium cations for sodium cations. After a completion of the regeneration cycle, the resin is ready for the further use.

The overall water hardness after the ion exchange water treatment (assuming the unused / regenerated resin filling) should be <0,1 °dH. Optionaly the outlet water hardness can be raised again to a requested level, simply by partial mixing with the raw water inlet. 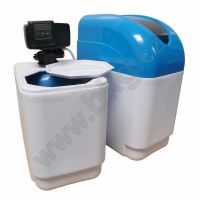 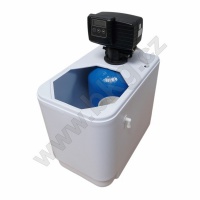